The target of this post is to show you how error handling works in Spring Integration, using the messaging system. You will see that error handling is different between synchronous and asynchronous messaging. As usual, I’ll skip the chat and proceed with some examples.

You can get the source code at my Github repository.

I will use a basic example, since I want to focus on exception handling. The application consists in an order service. It receives an order, processes it and returns a confirmation.

Below we can see how the messaging system is configured:

The gateway is the entry point of the messaging system. It will receive the order and send it to the direct channel “requestChannel”. There, a router will redirect it to the appropriate channel based on the order id:

Once the order is processed, an order confirmation will be sent back to the gateway. Here is a graphic representing this: 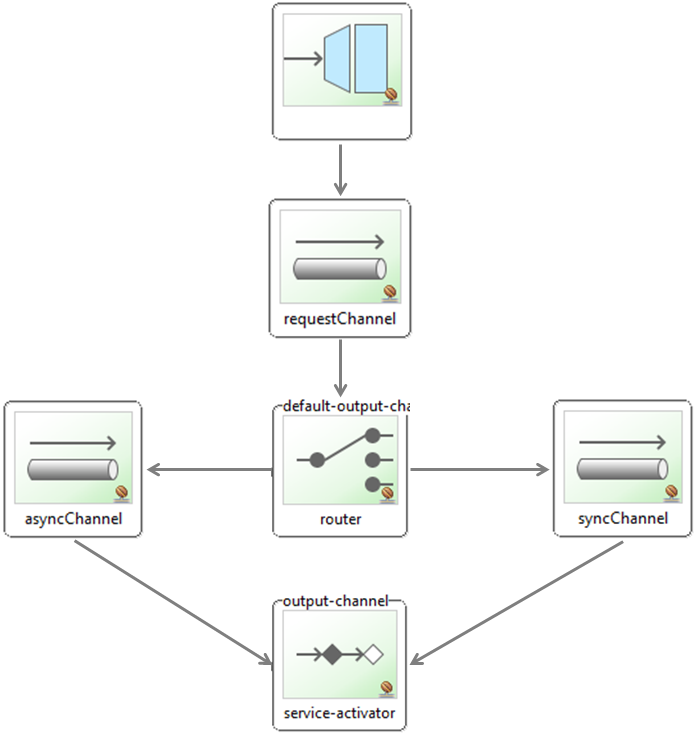 The order processor is subscribed to the “syncChannel” Direct Channel. The “processOrder” method will be invoked in the sender’s thread:

Now, we will implement a test that will provoke an exception by sending an invalid order. This test will send an order to the gateway:

We run the test and see how an exception is raised in the order processor and reaches the test. That’s fine; we wanted to validate that sending an invalid order raised an exception. This happened because the test sent the order and blocked waiting for the order to be processed in the same thread. But, what happens when we use an asynchronous channel? Let’s continue to the next section.

This section’s test sends an order that will be redirected by the router to the queue channel. The gateway is shown below:

Ok, so now we are going to launch the test and see the exception raising…

Oops the test failed because no exception reached the test! What happened? Well, the explanation is below:

Since we are using an asynchronous channel (a queue), the sender sends the order and moves on. Then, the receiver polls the order from a different thread. For this reason, it won’t be possible to throw the Exception back to the sender. Let’s act like nothing happened then? Well you better not, there are other options.

When using asynchronous messaging, Spring Integration handles exceptions by publishing them to message channels. The exception thrown will be wrapped into a MessagingException and become the payload of the message.

By default, a global error channel called “errorChannel” is created by Spring Integration. This channel is a publish-subscribe channel. This means we can subscribe several endpoints to this channel. In fact, there’s already an endpoint subscribed to it: a logging handler. This handler will log the payload of messages arriving to the channel. However, it can be configured to behave differently.

We will now subscribe a new handler to this global channel and test that it receives the exception message by storing it into a database.

First of all, we will need to change a few things in our configuration. I’ve created a new file so it doesn’t interfere with our previous tests:

I’ve also added a configuration file in order to configure the database. Our error handler will insert received errors to this database:

The error handler is pretty simple; it receives the error message and inserts its information to the database:

Ok, now is all set. Let’s implement a new test:

This time the test is successful, the error message has been stored to the database.

Custom error channel: You can define your error channel and define it as a queue channel instead of the default publish-subscribe channel:

ErrorMessageExceptionTypeRouter: This Spring Integration specialized router will resolve the channel where the error message will be sent. It bases its decision on the most specific cause of the error:

We have learnt what are the different mechanisms for error handling when using Spring Integration. With this base, you will be able to extend it and configure your error handling by implementing transformers. These, will extract the information from the error message, using header enrichers for setting error channel or implementing your own router among other things.

8 thoughts on “How error handling works in Spring Integration”