Spring 4 brings several improvements for MVC applications. In this post I will focus on restful web services and try these improvements by performing a migration from Spring MVC 3.2 to Spring 4.0. We will take a project implemented with Spring 3.2 and perform the steps to upgrade it to Spring 4.0. The following points sum up the content of this post:

The source code of the following projects can be found at github:

The starting project is implemented with Spring 3.2 (pom.xml) . It consists in a Spring MVC application that access a database to retrieve data about TV series. Let’s have a look at its REST API to see it clearer: 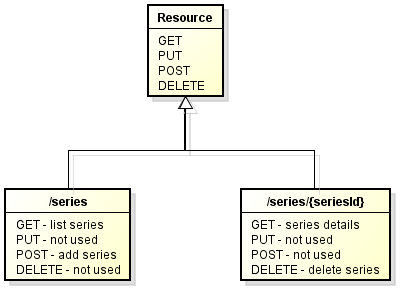 This class is responsible of retrieving the data from a mongoDB database:

This controller will handle requests and interact with the service in order to retrieve series data:

These integration tests will test our controller within a mock Spring MVC environment. In this way, we will be able to also test the mappings of our handler methods. For this purpose, the MockMvc class becomes very useful. If you want to learn how to write tests of Spring MVC controllers I highly recommend the Spring MVC Test Tutorial series by Petri Kainulainen.

I’m showing some of the tests implemented. Check SeriesIntegrationTesting for complete implementation.

The application contains some functional testing by using the RestTemplate class. You need the webapp deployed in order to test this.

That’s all, the web application is tested and running. Now is time to migrate to Spring 4.

This section explains which dependencies should be modified. You can take a look at the complete pom.xml here.

The first step is to change Spring dependencies version from 3.2.3.RELEASE to 4.0.0.RELEASE:

The next step is to update to Servlet 3.0 specification. This step is important since some of the Spring features are based on Servlet 3.0 and won’t be available. In fact, trying to execute SeriesIntegrationTesting will result in a ClassNotFoundException due to this reason, which is also explained this Spring JIRA ticket.

Don’t forget to change the namespace of your spring configuration files:

Review the information page linked in section 2 since there are some changes regarding mvc namespace.

If you check SeriesFunctionalTesting (setup method) again you will notice that the Jackson converter is now deprecated. If you try to run the test it will throw a NoSuchMethodError due to method change in Jackson libraries:

In Spring 4, support to Jackson 1.x has been deprecated in favor of Jackson v2. Let’s change the old dependency:

Finally, if you are explicitly registering message converters you will need to change the deprecated class for the new version:

The migration is done. Now you can run the application and execute its tests. The next section will review some of the improvements I mentioned at the beginning of this post.

If your REST API serves content in JSON or XML format, some of the API methods (annotated with @RequestMapping) will have its return type annotated with @ResponseBody. With this annotation present, the return type will be included into the response body. In Spring 4 we can simplify this in two ways:

Annotate the controller with @ResponseBody
This annotation can now be added on type level. In this way, the annotation is inherited and we are not forced to put this annotation in every method.

Annotate the controller with @RestController

This annotation simplifies the controller even more. If we check this annotation we will see that it is itself annotated with @Controller and @ResponseBody:

Using the utility class RestTemplate for calling a RESTful service will block the thread until it receives a response. Spring 4 includes AsyncRestTemplate in order to execute asynchronous calls. Now you can make the call, continue doing other calculations and retrieve the response later.

We took a Spring 3.2.x web application and migrated it to the new release of Spring 4.0.0. We also reviewed some of the improvements that can be applied to a Spring 4 web application.