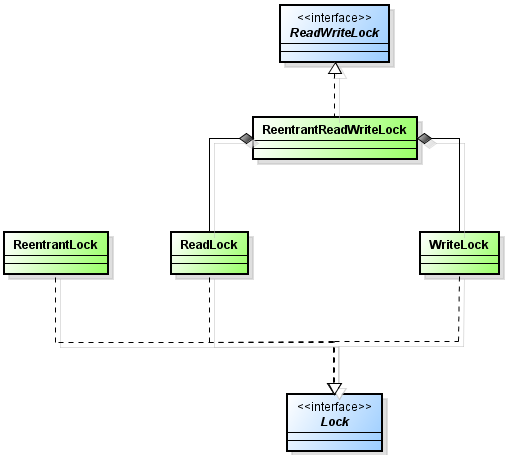 In many cases, using implicit locking is enough. Other times, we will need more complex functionalities. In such cases, java.util.concurrent.locks package provides us with lock objects. When it comes to memory synchronization, the internal mechanism of these locks is the same as with implicit locks. The difference is that explicit locks offer additional features.

The main advantages or improvements over implicit synchronization are:

Lock objects implement one of the following two interfaces:

The following class diagram shows the relation among the different lock classes: We are going to start with a simple example without locking, and then we will add a reentrant lock to see how it works.

Since the code above is not synchronized, threads will be interleaved. Let’s see the output:

Now, we will add a reentrant lock in order to serialize the access to the run method:

The above code will safely be executed without threads being interleaved. You may realize that we could have used a synchronized block and the effect would be the same. The question that arises now is what advantages does the reentrant lock provides us?

The main advantages of using this type of lock are described below:

Let’s look at an example using tryLock before moving on to the next lock class.

In the following example, we have got two threads, trying to acquire the same two locks.

One thread acquires lock2 and then it blocks trying to acquire lock1:

Another thread, acquires lock1 and then it tries to acquire lock2.

Using the standard lock method, this would cause a dead lock, since each thread would be waiting forever for the other to release the lock. However, this time we are trying to acquire it with tryLock specifying a timeout. If it doesn’t succeed after four seconds, it will cancel the action and release the first lock. This will allow the other thread to unblock and acquire both locks.

If we execute the code it will result in the following output:

After the fourth line, each thread has acquired one lock and is blocked trying to acquire the other lock. At the next line, you can notice the four second lapse. Since we reached the timeout, the first thread fails to acquire the lock and releases the one it had already acquired, allowing the second thread to continue.

This type of lock keeps a pair of internal locks (a ReadLock and a WriteLock). As explained with the interface, this lock allows several threads to read from the resource concurrently. This is specially convenient when having  a resource that has frequent reads but few writes. As long as there isn’t a thread that needs to write, the resource will be concurrently accessed.

The following example shows three threads concurrently reading from a shared resource. When a fourth thread needs to write, it will exclusively lock the resource, preventing reading threads from accessing it while it is writing. Once the write finishes and the lock is released, all reader threads will continue to access the resource concurrently:

The console output shows the result:

As you can see, when writer thread acquires the write lock (thread-4), no other threads can access the resource.

This post shows which are the main implementations of explicit locks and explains some of its improved features with respect to implicit locking.

This post is part of the Java Concurrency Tutorial series. Check here to read the rest of the tutorial.

You can find the source code at Github.